skip to main | skip to sidebar

This Thursday, October 29, Natalie will be participating in an exquisite corpse (http://en.wikipedia.org/wiki/Exquisite_corpse) in honor of Halloween. This live drawing event will take place at the Dead Celebrity Ball at St. Luke's Theater, 308 W. 46th Street from 8-1 am and will feature a special performance by Julie Brown (Just Say Julie!) and open bar. Tickets to this benefit ball are $21.50 in advance, $30.

The following Tuesday, November 3, Natalie will once again be participating in the annual SAWCC benefit auction. She has donated her piece Big Mouth for this event. If you'd like to be the proud owner of Big Mouth (and would like to check out some other killer art, too) stop by this auction and bid!

For more info on these events:

This has got to be one of the most awesome, hilarious, and possibly dead-on descriptions of my art work that I've ever read:

"It’s like witnessing a dark pink floyd moment scratched together by someone who’s heard about the kind of art that’s in childrens books and thinks they’ll give it a damn good go but can’t see why an abundance of horror and nastiness embedded into the feel of a painting is a bad thing to give a three-year old."

Thank you Lucas from Australia!

Um, in other news, I swear I am going to paint again soon. Swears it! Ideas are brewing... but time has been null.
Posted by natty art at 6:07 PM 1 comment:

We just got home from the Francis Bacon special exhibit at The Met which just opened this week. Do NOT miss this one. It is a great colelction of works spanning his entire career.

Bacon is easily one of my top favorite artists of all time as well as a huge influence on the direction my art eventually took. I had been painting cutesy cute until I realized that my personal visual pleasure came from the grotesque. And eventually I found the happy medium between cute and grotesque = natty art. You can see Bacon's influence on my art especially in my piece, Pope Something Something IV. Sure, I painted it around the time the current Pope was being elected. But I definitely had Bacon's paintings after Velázquez's Portrait of Pope Innocent X in mind as well. 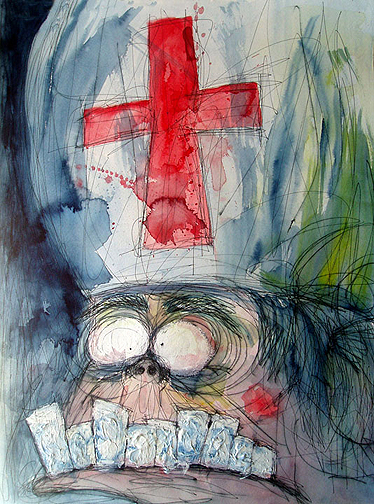 The Bacon exhibit at the Met is up through the Summer until mid August. Be sure to check it out.

While we were at the Met, we also lurked around in my favorite section -- the African / Pacific Islander area. I am forever fascinated by these pieces. So creepily cute and weird... They often remind me of Tim Burton creations. I should probably do some more reading into the Pacific Islander stuff because I know how much more I enjoy the arts of Africa having taken a whole semester of study into these pieces during undergrad. They are cool enough visually to look at, but so much more fascinating to me just knowing the uses behind the masks and statues.

Also while there, we adventured through the medieval and religious based older paintings. Absolutely fantastic stuff. And which today was reminding me of one of my favorite books when I was a (little bit twisted) little kid: 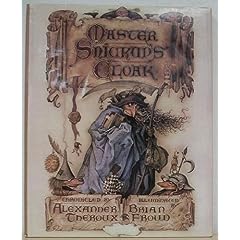 Because I'm on an update kick today... I never posted the finished set of the Seven Deadly Sins which showed at White Rabbit, NYC during the month of March of this year. Lust was sold to a happy home in Italy near the Vatican (how appropriate!!!). But the others are all up for grabs. Please email me for inquiries.

Sloth
Posted by natty art at 11:35 AM No comments:

I have been on a bit of a creative hiatus from painting for a little while here. All the big shows and work towards those shows burned me out a bit. But, I just bought a lovely (and BIG) sheet of watercolor paper to start on something new soon. In the meantime, I've been exploring other creative outlets. I've always been an avid photographer and a huge fan of Cindy Sherman's work. I find self-portraits to be fascinating. Altering your own image... letting the world see you as you see yourself. I don't know. There is just something fascinating about someone capturing their own self. The past few months I've started a series of self-portraits in which I recreate album covers. This has been incredibly fun. It simply started as an idea where I thought it would be fun to do a bloody self portrait ala Andrew WK's album. And that got me to thinking how fun it would be to just completely recreate that cover itself. And from there, the project was born. It's been trial and error with hair and makeup, lighting, camera angles, and photoshopping. I love this project because I am learning a lot of technique and skills by just making what needs to happen happen. Anyways, enough of an artist statement... here are the photos (with their album comparisons).

I love magic where you least expect it.

natty art at "Girls Night Out" this Thursday night at Pyramid

I'll be showing a pair of paintings this Thursday night. Stop by for bands, burlesque, and a whole lot more!

natty art was recently featured in a "book of inspiration" project. Check out the book here. It was a thrill to be included with so many other artists that I find inspirational myself!

The opening reception for the White Rabbit, NYC show was a great time! Thank you so much for everyone who stopped by. It was quite the packed house! And thank you to DJ Frankie Teardrop for providing the perfect background soundtrack for the evening. Photos of the event can be seen here for those of you who might have missed out. And, if you did miss out, the show will still be up through the month of March. So if you are in the vicinity, be sure to stop by 145 Houston to check it out!
Posted by natty art at 10:39 PM No comments:

Please join artist Natalie Kocsis for the opening reception of her latest show at the White Rabbit lounge on Friday, February 27. Natalie will be showing a number of new works and, for the one and only time ever, the complete Seven Deadly Sins series. White Rabbit is located at 145 Houston (btwn Eldridge and Forsyth). The opening reception will take place from 7pm-10pm. Please visit www.natty.org to see what natty art is all about and for further information. 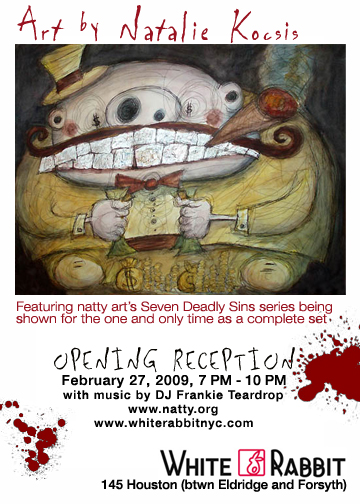 natty art
brooklyn, ny
Natalie Kocsis has her Masters degree in Illustration and a Bachelor's degree in a bunch of other stuff. Her illustrations have appeared in a number of magazines. Natalie is currently working on self-publishing her first children's book entitled Lucy Goes to Coney Island and is trying to get her art onto more public walls. She lives in Brooklyn, NY and enjoys listening to heavy metal music while experimenting with new ways of creating messy art.